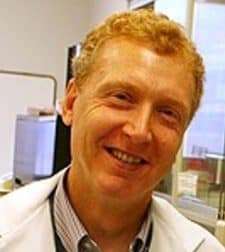 Research focuses on inflammation in neurological and neurodegenerative disorders. In addition, research is interested in cancer, cardiovascular disease, inflammatory diseases and epigenetic effects.

Dietary supplementation of fruits and vegetables has been the main stay for nutritional benefit and overall well-being. GrandFusion(®) is a nutritional supplement that contains the natural nutrients from whole fruits and vegetables that include complex nutrients and phytonutrients that contain anti-oxidant, anti-inflammatory, and neuroprotective properties.

In this study, C57BL/6 mice were fed a diet supplemented with GrandFusion(®) for 2 months prior to 1 hour of ischemia induced by occlusion of the middle cerebral artery (MCAo) followed by various times of reperfusion. Mice were subjected to MCAo for 1 hour and then at various times following reperfusion, animals were assessed for behavioral outcomes (open field testing, rotarod, and adhesive test removal), and infarct volumes (cresyl violet and triphenyltetrazolium chloride). In addition, to determine the potential mechanisms associated with treatment, the brain tissue was examined for changes in oxidative stress and inflammatory markers.

The GrandFusion(®) diet was able to show a significant protection from infarct damage in the brain and an improvement in neurological outcomes. The diet did not alter heart rate, blood pressure, pO2, pCO2, or pH. In addition, the diet mitigated inflammation by reducing microglial and astrocytic activation following ischemia and reperfusion and limiting oxidative stress.

The study demonstrates the neuroprotective effect of a diet rich in fruits and vegetables that contain anti-oxidant and anti-inflammatory against the impact of cerebral ischemia and reperfusion injury.

Studies have shown that supplementation with extracts from various sources, including fruits and vegetables reverse the age-related changes in movement and cognition. We hypothesized that these beneficial effects result from the presence of anti-oxidants and anti-inflammatory compounds in the fruits and vegetables that contribute to reduced oxidative stress, inflammation and cell death while potentially enhancing neurogenesis. The present study was performed to determine the impact of supplementation with GrandFusion®(GF) to aged Fisher 344 rats for 4 months to determine the impact on attenuation or reversal of the age-related deficits. When the aged rats consumed a diet enriched with the extracts the results showed an improved motor performance, and enhanced cognitive functions. In addition, the rats showed reduced oxidative stress and inflammation, and enhanced neurogenesis, Nrf2 and anti-oxidant expression. The effect of GF extracts on the augmentation of memory and learning is significant and may function through the modulation of antioxidant enzymes, signaling pathways and additional mechanisms to improve the aging process. These studies further support the recommendation of USDA for the consumption of fruits and vegetables to improve healthy aging.

The effect of diet on improved endurance in male C57BL/6 mice. Molecular Nutrition and Food Research (2017)

Recent studies suggest that nutrition plays a critical role in improving the outcome from traumatic brain injury (TBI) in both civilians and military personnel. This studied showed that a diet enriched in nutrients from fruits and vegetables improved recovery from TBI in the controlled cortical impact rodent model. Results demonstrated that mice fed the diets had improved activity, reduced injury, and reduced inflammation. These data suggest that consumption of diets enriched in plant based nutrition (fruits and vegetables) either naturally or through powdered form can provide protection from the detrimental effects of TBI.

Repetitive mild traumatic brain injuries (rmTBI) are associated with cognitive deficits, inflammation and stress related events. We tested the effect of nutrient intake on the impact of rmTBI in an animal model of chronic traumatic encephalopathy (CTE) to study the pathophysiological mechanisms underlying this model.

Animals on nutrient diets showed attenuated behavioral changes. The brains from all mice lacked macroscopic tissue damage at all time-points. The rmTBI resulted in a marked neuroinflammatory response, with persistent and widespread astrogliosis and microglial activation, as well as significantly elevated phospho-tau immunoreactivity to 6-months. Mice treated with diets had significantly reduced inflammation and phospho-tau staining.

Studies using traditional treatment strategies for mild traumatic brain injury (TBI) have produced limited clinical success. Interest in treatment for mild TBI is at an all-time high due to its association with the development of chronic traumatic encephalopathy (CTE) and other neurodegenerative diseases, yet therapeutic options remain limited. These studies, we have demonstrated promise, using nutritional supplementation from fruits and vegetables, particularly those that modulate secondary injury cascades activated after injury.

This study investigated the effects of intervention with a combination of nutrients in the amyloid precursor protein-presenilin (APP-PSN) C57BL/6J double transgenic mouse model of Alzheimer’s disease (AD). An improvement in antioxidant capacity was observed in the treatment groups, while enhanced behavioral test results were observed in the mice with the diet. Early intervention with a combination of plant based nutrients should be considered as a strategy for preventing cognitive decline and other symptoms associated with AD.

Numerous studies indicating that nutritional supplements from fruits and vegetables offer protection to the pathological processes related to the development of neurogenerative diseases including Parkinson’s disease (PD). In the present study, the neuroprotective efficacy of dietary supplementation for 2 months was examined in 1-methyl-4-phenyl-1,2,3,6-tetrahydropyridine (MPTP) (i.p., 20 mg/kg body weight/day). MPTP injection diminished the levels of GSH, dopamine and metabolites along with decreased activities of GPx and mitochondrial complex I. Further, the levels of TBARS and enzymatic antioxidants such as SOD and catalase, MAO-B activities were enhanced by MPTP treatment. Behavioral deficits and lowered TH expression are also proved MPTP induced neurotoxicity. Dietary supplementation attenuated MPTP-induced impairment in PD mice might be by its MAO-B inhibitory, antioxidant and mitochondrial protective actions.

Occlusion of the middle cerebral artery (MCAo) is among the most common causes of ischemic stroke in humans. Cerebral ischemia leads to brain lesions existing of an irreversibly injured core and an ischemic boundary zone, the penumbra, containing damaged but potentially salvageable tissue. Using a transient occlusion (1 hr) of the middle cerebral artery (tMCAo) mouse model we investigated the neurorestorative efficacy of a dietary approach to counteract neuroinflammation and impairments of cerebral (structural+functional) connectivity, cerebral blood flow (CBF), and motor function.

The consumption of nutrients from fruits and vegetables helps to maintain physical activity and improves endurance. These results of this study demonstrate that GrandFusion diets enhance exercise endurance and improve physical outcomes that are mediated by improving energy production.

Influence of Diet in a mouse model of multiple sclerosis (PENDING)

Nutrition is considered to be a possible factor in the pathogenesis of the neurological disease multiple sclerosis (MS). Nutrition intervention studies suggest that diet may be considered as a complementary treatment to control the progression of the disease. Our data suggests that nutritional supplementation derived from fruits and vegetables of MS mice slows the progression of the disease and alleviates symptoms.

There has been little interest in the role of nutrition in the prevention of amyotrophic lateral sclerosis (ALS). We investigated the relationship between dietary intake of nutrients from vegetables, fruit, and antioxidants and the risk of ALS. Our findings suggest that higher intake of food rich in antioxidants such as fruit and vegetables confer protection against the development of ALS.

Sepsis induces an acute inflammatory response in the liver, which can lead to organ failure and death. Given the anti-inflammatory effects of nutritional supplementation from fruits and vegetables, we hypothesized that chronic consumption of nutrients from fruits and vegetables could protect against acute sepsis-induced liver inflammation via mechanisms, including heat shock protein (HSP) 70/72.

Myocardial ischemia is associated with alterations in cardiac metabolism, resulting in decreased fatty acid oxidation and increased lipid accumulation. Here we investigate how nutritional supplementation from fruits and vegetables can impact myocardial mitochondrial dynamics affect the function of the ischemic heart, and focus on the role of the inflammation in the pathophysiology of myocardial ischemia.

This study evaluates the intestinal anti-inflammatory effects of nutritional supplements from fruits and vegetables in a mouse model of colitis induced by 2,4-dinitrobenzenesulfonic acid that resembles human IBD. At a concentration of 2%/day, the diet improved the symptoms of intestinal inflammation, namely by decreasing the disease activity index, colonic weight/length, and leukocyte infiltration. Moreover, the nutritional supplement inhibited NF-κB p65 and p38 MAPK signaling pathways and consequently down-regulated the gene expression of various proinflammatory markers such as IL-1β, IL-6, IL-17, TNF-α, iNOS, MMP-9, ICAM-1.