A new book called “Ingredients” by photographer Dwight Eschliman and writer Steve Ettlinger was recently launched and this is definitely more than a must-read. “Ingredients” seeks to expose 75 common food additives by providing an easy-to-read encyclopedia which will give insight to the structure, use and history of each additive.

The two authors are promoting eating more fruits and vegetables and cutting down on processed foods. They plan to use the book to expose how dangerous some additives are and to raise awareness among consumers. Hopefully, this will start to force food companies to commit to clean labels and natural additives in the future.

“Everybody wanted us to align very much with those on the soapbox talking about how bad the food was…I wanted to take some measures to prevent that.” – Dwight Eschliman

Eschliman’s first step was to organize the additives into three categories: neutral, negative, and positive. He admitted that he initially placed monosodium glutamate (MSG) in the negative pile because of the additive’s reputation for causing “Chinese restaurant syndrome” – health concerns such as heart palpitations, allergic reactions, and so on. However, scientists now agree that this negative reputation is entirely unsupported. Glutamate is a naturally occurring amino acid. It is a flavor-enhancer that makes tomato sauce and Parmesan cheese tasty. It has developed a bad reputation due to poor understanding of the structure of MSG and public mistrust.

Another misunderstood additive is a yellow powder called azodicarbonamide, or ADA. Last year Vani Hari, blogger and activist behind the name Food Babe, petitioned Subway to remove the “yoga mat chemical” found in its bread. The production of ADA has been documented to cause asthmatic symptoms and skin irritations to people who manufacture it, but has no evidence of any risk to people who consume it.

It definitely sounds strange that the same additives found in yoga mats, fertilizers, fire retardants, rust dissolvers and rocket fuel can also be found in the food we eat. But it doesn’t really mean that we are eating these items. Additives such as salt, for instance, are composed of sodium and chlorine and have an estimated 14,000 industrial uses.

Ettlinger and Eschliman provide a fantastic insight about additives in their book. There is even trivintor each additive on every single page. It’s easy to be scared of these additives when you have very little knowledge about each of them. “As it happens, it doesn’t take much to understand,” Ettlinger says. 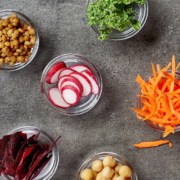 New Ingredients Will Grow Sports Nutrition Market by 8% until 2020